Facing global “arc of instability”, Trump leaves us with nothing but hope by Harlan K. Ullman

Even with President Donald J. Trump asserting that his White House is "running like a fine-tuned machine," the rest of the world is not. As U.S. Secretary of Defense Jim Mattis sees it, an "arc of instability" runs from the Western Mediterranean to the Eastern Bay of Bengal. Not a scintilla of evidence suggests that any resolution of the conflicts and civil wars in Syria, Iraq, Libya and Yemen is within light years of occurring. Europe is still grappling with the wave of refugees and immigrants. And Ukraine remains a battleground in its eastern provinces.

The White House has replaced National Security Adviser Michael Flynn with Army Lt. Gen. H.R. McMaster, an officer who has distinguished himself in battle on a number of occasions and as an historian writing a scathing critique of the Vietnam War titled Dereliction of Duty. But the administration is still laden heavily with chiefs and no Indians vital to the functioning of government, especially for defense, foreign policy and counterterrorism. Thus far, Trump’s strategic vision conforms more closely to Winston Churchill’s observation about Russia that it "is a riddle wrapped in a mystery inside an enigma."

Trump declared that the "one China policy" may be subject to negotiation and had to backtrack. He gave at least a yellow light to the more right-wing elements in Israeli Prime Minister Benjamin Netanyahu’s Cabinet that the longstanding policy of a "two-state solution" to resolve the intractable Palestinian conflict may no longer be necessary. So deciphering what Trump means in his pronouncements and what becomes actual policy are in different universes.

Further, while any speculation is Churchillian in scope, it could well be that the Trump team envisages a double grand bargain. The first part is to bring Israel, Saudi Arabia and the Gulf states together in a de facto consortium aimed at containing Iran and possibly leading to a regime change to oust the Tehran clerictocracy.

The second part is a rapprochement with Russian President Vladimir Putin in part as an offset to China. This partnership will include joint action against the Islamic State and resolution of the crises in Syria and Ukraine. Ultimately as an incentive, economic sanctions on Moscow would be lifted. To some, the grandness of this bargain is the reverse of Nixon going to China and using Russia as the lever.

To more experienced observers, this highly complicated and convoluted plot is dangerous and unworkable, reminiscent of the Reagan administration’s Iran-Contra fiasco. That enterprise involved shipping arms to Iran in exchange for the release of American hostages and recycling the money to support the Contras in Nicaragua — all highly illegal let alone reflecting not an ounce of strategic common sense. Whether the meetings reportedly between Trump officials and Russians before the inauguration will support this hypothesis of a grand bargain or not, only an objective and dispassionate investigation can determine. And trying to use Russia against China is a fool’s errand.

In some ways, the scent of early 1914 is in the air. Then, secret alliances wedded the Allies — Britain, France, Russia and Italy — against the central powers — Wilhelmine Germany, the Austro-Hungarian and Ottoman Empires and Bulgaria. Because of the close family relationships between and among the many ruling royal families, these blood links were believed thick enough to avoid war. And the 1933 Nobel Prize-winning economist Sir Norman Angell could make the (brilliant but entirely wrong) prediction in his 1910 The Great Illusion that the economic costs of war in Europe would be so astronomical that conflict was impossible.

Obviously, 2017 is entirely different from 1914 in every sense but one. What ignited World War I was the assassination of Archduke Franz Ferdinand and his pregnant wife, Sophie, on that infamous bridge in Sarajevo on June 28, 1914. Within a month, both sides would mobilize and war became inevitable.

Today, with so many interconnected ongoing crises and conflicts, a surfeit of potential bullets and archdukes exists. An unfortunate mishap such as a Russian fighter buzzing and colliding with an American or NATO warship or another shoot down as happened over Turkish airspace is possible. A freedom of navigation exercise in disputed waters in one of the China seas could provoke a crisis. And of course a major terrorist attack of Sept. 11 proportions could escalate into major conflict.

Then, the nuclear unpredictability of Kim Jong Un or the abrogation of the Joint Comprehensive Plan of Action signed with Iran could, in the Trump administration, be precursors to pre-emptive American attacks to prevent further proliferation. Nor is this paranoia. At the Munich Security Conference, Sen. John McCain called this period more dangerous than any time since the Cold War ended.

What can be done? Ideally, the Trump White House can make a sober and non-ideological assessment of the fragility of the current international security condition before it embarks on major policy changes, especially ones that could prove reckless. That Trump has appointed Stephen Bannon to the NSC is disturbing. Bannon has no experience in government, foreign policy or in dealing with the most sensitive security issues. And it is widely reported that Bannon exercises considerable influence on a president as inexperienced as is Trump.

Before McMaster agreed to take the post, Vice Adm. Bob Harward and Gen. David Petraeus declined to serve as national security adviser. That spoke volumes about turbulence in the White House and the lack of discipline and process essential to formulating sound policy decisions. Perhaps McMaster can instill the needed discipline and process that is required.

Mattis at defense and Rex Tillerson at state are consummate professionals despite the latter’s absence of government service. However, the ironclad political rule in Washington is that power and influence are inversely proportional to the physical distance from the Oval Office. That means Foggy Bottom and the Pentagon are politically miles away.

Hence, this scent of early 1914 can only be taken as a warning. The likelihood of a real calamity is probably low. Yet, the ingredients for a geostrategic meltdown are certainly present. The full Trump administration will not be in place for months when the majority of important appointments are made and confirmed by the Senate. And the next national security adviser may understand the risks and dangers far better than the occupant of the Oval Office.

Sadly, none of these data points is reassuring. Hope is never a strategy. But at this point in this new administration, hope appears to be about all the public has if catastrophe is to be averted — not comforting news. 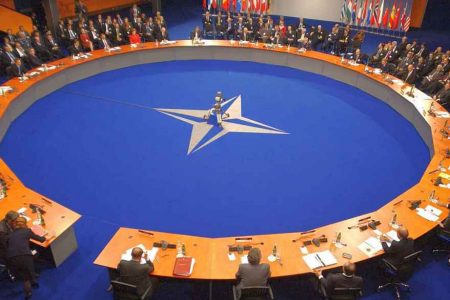